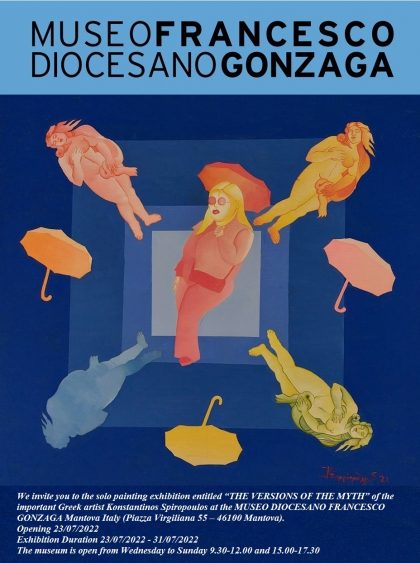 Kostantinos Spiropoulos – The Versions of the Myth

– A free person is a good person.
– Since its appearance, man weaves culture like a spider weaves its web. The ecosystem is not in danger due to the spider web, while from human civilization, in all likelihood, the ecosystem will suffer irreparable damage.
– The means we have to prevent it are Philosophy, Art and Science. I understood that I had to deal with Art, but also with Science. I wanted to learn as much as possible about man and the world. I was fascinated by the human condition, life and its journey. It was impossible to be just a painter because I would have a superficial view of the world that I would have captured.

Medicine has enormous and shocking appeal for me, because it tries to correct God’s experiment in dealing with mortality and pain and possibly make life less painful. Because life cannot really aim at achieving maximum happiness, but the least possible misery, as Schopenhauer argues. I like art, because it is not so much a question of answering important questions as of reviewing data and values, mainly aesthetic, a process that involves the interaction of reason and feelings. In this way, perspectives, conventional forms and established beliefs are revisited.

In particular, painting fascinates me, because it creates forms that are a condensation of culture and life. Painting, in its attempt to “write” the world, understands it in the way in which the intellect, imagination and emotion can complete it, and overcomes, even temporarily, the despair caused by the certainty of self-cancellation.

Contemporary thinking claims that space is not void. It is connected with the creation of instantly formed “virtual” particles, which fill the void the virtual space, leaving clear traces of their activities, one of which is visual excitation. Ironically, our vision, our means of seeing and getting to know the world, is partially “blind”, as it cannot tell many small particles apart and interprets them as one. Thus, based on our vision, we form a distorted view of the real world of forms as Plato describes it. Because the world is formed by both mater and space. Space however, is a vacuum that bubbles, full of field escalations, a soup of virtual particles constantly coming to life and dying. Space is there. It is dynamic, a developing entity, it is not static nor empty, it is the scrim on which our “visible” world’s shadow theatre is performed. Figures hold leading roles in the theatre of life, the scrim acting as the prerequisite for the play. Painting is the soughtafter, colourful maiden exploring the truth in the play and the roles. Because in the play called life, the subject is very important, but the distribution of roles is ridiculous.

Kostas Spiropoulos was born and grow up in Patras, Greece. Graduate from the Medical School of Athens University. Immediately after he travels in the United States of America and in Europe for several years where he studies in Art (Heron Art Institute) and exposes his Art work in Several Galleries, International art Fairs and Biennales in different countries of Europe and North America. For eight (8) years he teached as an Associate Professor in School of Fine Arts of the Ioannina University, the lesson of Artistic Anatomy and he was the author of the book of Artistic Anatomy printed from the University of Ioannina

Kostantinos Spiropoulos – The Versions of the Myth – ENG
Condividi